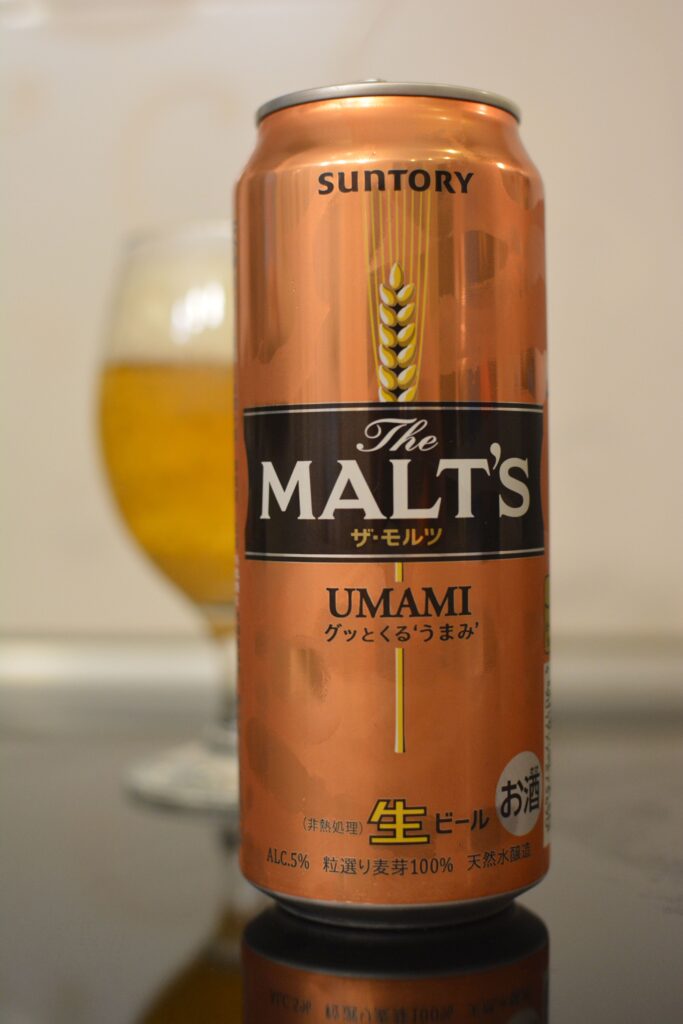 I wrote about Japanese beer and expectations of it not too long ago. History repeats itself — inflated expectations, price in the ceiling and a Eurolager on the way out. Of course, Japan and even more so Japanese beer doesn’t owe anyone anything. They brew and they brew. Like everywhere else — to buy or not, it’s up to you! But, for some reason we expect a miracle from the Japanese.

Also confused by the inscription on the can — Umami. As you know, there are four flavors and the fifth is umami. The key phrase is «as you know». I’m closer to the theory that there are many more basic tastes than the four plus… For example — the taste of iron. How would you describe it in the «as known» paradigm? Salty? Sweet? No, it’s the taste of iron and no umami will help!

Nevertheless, seeing on the can such a bait, we expect at least Doshirak. And what do you end up with?

The Malt’s Umami (Japan, Tokyo) — 5/11 Aroma is weak. The taste of malt. The aftertaste is dry, the malt is noticeable, but the hops on the minimum. A simple eurolager. What the umami has to do with it! Poor, but clean. Not much different from the domestic beer giants, although, I lie — the price. The price is five times higher. Something like 260-280 rubles. And next to it was beer Eboshi and judging by the stock on the shelf, bought much better. That’s probably the point — put a super expensive Japanese one next to a cheap skoshi. The difference in taste is minimal, but the difference in the wallet is palpable. The Malt’s Umami grade is a «C.»

Not really an advertisement, but an endorsement for the sake of it. For those who want to start understanding beer — based on the wine school WineQ, is launching a series of lectures about beer. The first lecture will take place on March 13 at 10.00. The topic of the lecture is Mikhail Pakhalova, it’s called «Beer 101». .

Mikhail, graduate of Enotria school, member of Russian Sommelier Association, Craft Depot expert, holds certificates of the authoritative organization Cicerone in 3 areas and is a brewer himself.
«Beer 101» is a general course that provides an introductory competency in beer and so-called beer drinks. The 6-hour intensive covers the following topics:
* basic and additional ingredients in brewing;
* general technology and peculiarities of making various styles of beer;
* beer myths and misconceptions;

* Brewing history on the example of main European schools with tasting of the most significant styles:* British school — porter, bitter, strong ale

* German school — dunkel, wheat beer, kölsch
* Belgian school — dubbel, blond, flaman ale
All samples are provided by our partner SVAM Group (@svam.group on Instagram)
Course price: 2500 rubles. You can learn more and sign up by writing us in direct message or by calling: +7 (925) 377-55-30
This is a trial balloon in terms of beer education, in the manner of how vinniks do it. In the future, lectures on brewing itself, on beer in the USSR and modern Russia, on Belgium and Germany, and much, much more!»
As they say — stay tuned!
Summary
Reviewer
Alexandr Idzhon
Review Date
2021-03-05
Александр Иджон
The Malt's Umami Beer
Author Rating
3