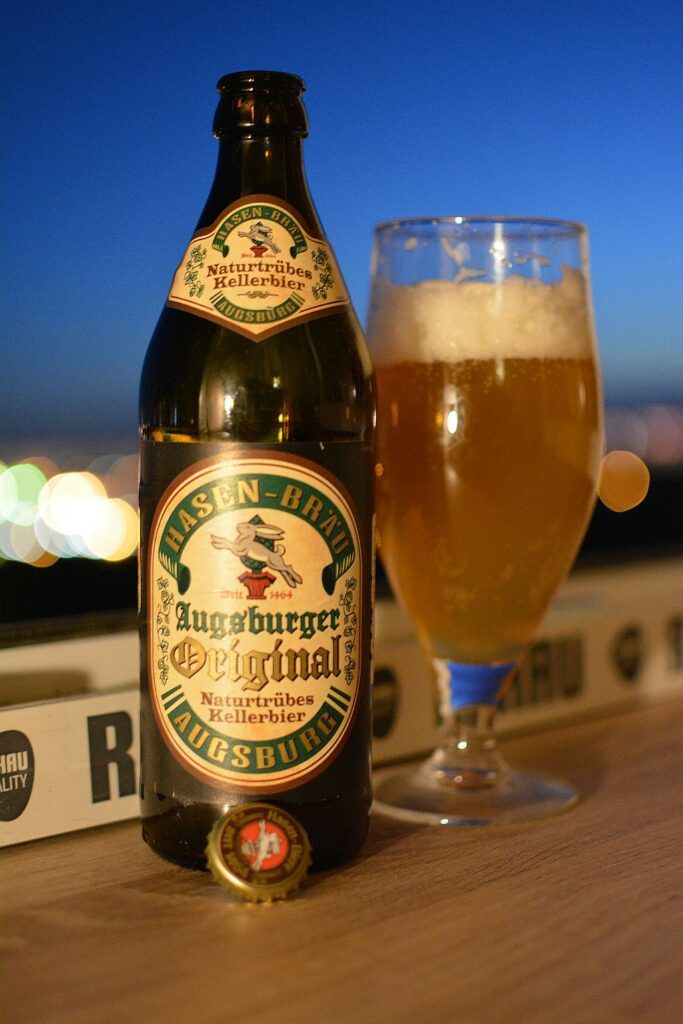 Let’s go through the Germans again. Spotted at Perekriostok is a new (have you seen Weizen before?) German regional — Augsburger Original by Hasen-Bräu. Not cheap, almost 200 tenge!

The history of the brewery could probably win the contest «Who has the oldest brewery». They come right in with a bang! They not only claim 1464 as a founding year, but dip their noses in Munich’s mud — the city of Munich wasn’t even in the planning stage yet, while in the blessed city of Augsburg a strict but respected brewers’ guild was already flourishing!

And with the notorious Reinhatsgebot, they even pasted the walls in the toilets, because back in the distant 1156, in their city there was a decree allowing to brew beer only from water, malt and hops (strange that the yeast, which the Augsburg brewers probably knew and loved even before Emil Hansen, was not mentioned). That’s the kind of cool brewers found in the glorious Augsburg.

As for the Hasen-Bräu brewery itself, its roots go back to the famous Zu den drey Glass (you haven’t heard of Zu den drey Glass?! Weird!). But they called it Hasen-Bräu after the 18th century, when the owner of the place chased a rabbit into the restaurant. The hare got away unharmed, but the owner fell. In Russia it is not called a hare, but a squirrel, but all the same — a story worthy of inclusion in the brewing tablets and putting the image of a hare on the logo.

Much more is written in the history of Hasen-Bräu brewery, but you have to give the brewery its due — it is indeed a very beautiful brewery. The modern Braukon equipment and the old building are a great combination. Also added it for a visit in the beautiful times of a guilt-free future.

Augsburger Original (Augsburg, Germany) — 5.4/12.3 The official website says this is a beer with natural turbidity. And it is. There’s plenty of yeast in it. If it stands for a long time, they flake to the bottom and float around in ugly flakes after opening. But, Augsburgers probably just shrug their shoulders in bewilderment if someone says the beer «stands a long time.» Why stand it up! Drink it right away!

The aroma is yeasty and floral. The taste is pleasant, full, bready, malty. In the aftertaste a slight sourness from the yeast and the sweetness of the malt. Low carbonation makes this beer very drinkable.

A typical regional Kellerbeer. Maybe not the best, but quite decent as an example of the genre. Rated «B-» (I would still reduce the yeast).