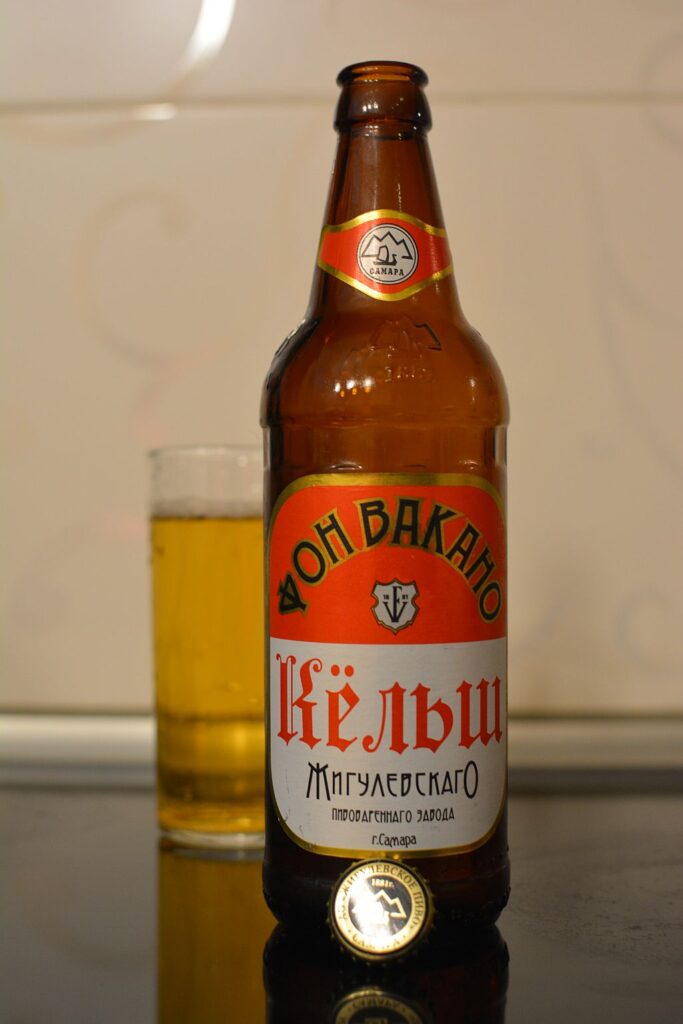 I’ve heard a lot of hihaneks and hahaneks about this beer. Like, Zhigulevsky kölsch — ha, ha, ha! However, nowhere on the label does it say that this is Zhigulyovo beer. It says «Zhigulyovsky brewery». A game of pre-revolutionary marketing.

If before the Revolution most breweries brewed «Pilsner,» «Bavarian,» «Munich,» etc., then why wouldn’t it be kölsch? Yes, yes, I know it’s a protected appellation of origin. But since champagne is «sparkling wine» and St. Petersburg bottled soda is «champagne,» let’s forgive such a liberty. Although, of course, it would be more correct to call this beer «in the Kölsch manner.

I don’t understand such snobbism — why a brewery brewing «traditional» beer can’t start to produce something interesting, if there is demand. Moreover, not many people brew kölsch, and it is close to the average consumer.

For those who have just started reading the blog and don’t know what kölsch is, let me explain: it is a «hybrid» style of beer from the city of Cologne. The primary fermentation takes place at higher temperatures than traditional lagers, but the secondary fermentation is «just right. That’s why kölsch has a more floral and bright flavor.

It’s a fallacy to say that it’s just lagers fermented at high temperature, as is sometimes written. No! Kölsch (and ales) have their own yeast race and primary fermentation temperature of 15-21ºC (ales have 19-23ºC as a rule).

In fact Kölsch in its modern form appeared only in XX century, and one can consider it to be quite a young style of beer, although its history goes back to the tradition of top fermentation, and more exactly to Wiese style, which itself originates from Cotebier.

I will not claim 100% that Samara brewery used the right yeast and generally followed the classic recipe of kölsch (wheat malt is not used in kölsch, although not forbidden), but at least they tried it.

Kölsch by Von Vakano (Russia, Samara) — 4.5/11 The aroma is lollipop, and brightly so. When the beer breathes, lollipops give way to proper floral tones. There’s a slight cardboard-like extraneous to the palate. There is no sparkle and freshness. In the aftertaste also shows cardboard. There is a little hop, but very weak.

A rating of «C,» but an A for trying to go beyond Zhigulyovsky! Of course with Fruch or Zunft, no comparison, but in principle you can drink.