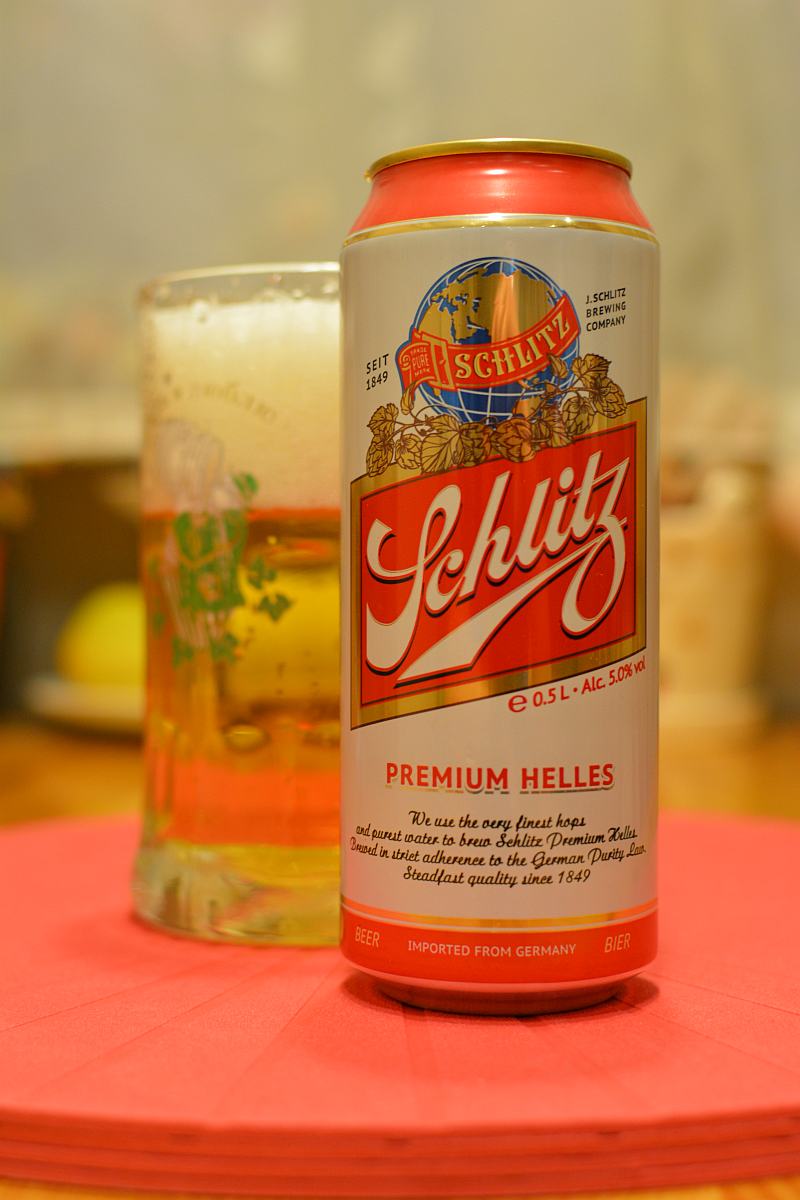 Walked into a Dixie store yesterday. I usually pass by, as the assortment there is meager, and the quality is often not so good. It’s not about beer, it’s about ordinary products. The beer shelf in Dixie, you can’t even look at it without tears. At least in the store that we have in the village. Nevertheless, I went in, ran my eyes over it. It seems nothing has changed, no novelties, vintage is also not interesting. Suddenly I notice, next to Pabst Blue Ribbon (it’s on sale now for 70 rubles), something unusual. Looks like a German regional, privatbrand. Took a closer look. Yes, Germany, but the name is very familiar! Schlitz, that’s a famous American beer! Why is it from Germany then? Took a look at it.

First a little history, “How to make a turd out of candy, out of something nothing and throw it all out the window”.

The Schlitz Brewery in Milwaukee, Wisconsin, was founded in 1849 by August Krug. In 1858, it was bought by Joseph Schlitz (while marrying Krug’s widow), who renamed the brewery after himself. By 1902, it would be the largest brewery in the United States. Having survived Prohibition and re-launched production, by 1934 it also became the largest in the world in terms of sales. With its beer, Joseph Schlitz Brewing Company made Milwaukee known throughout America. The brewery successfully competed with Anheuser-Busch itself! It would seem, live and grow culturally… But no! An alternatively talented manager could ruin any enterprise!

By 1967, a descendant of the founder, Robert Uhlein Jr., in order to further increase and cheapen production, began to play with corn syrup, high temperature fermentation, and the apotheosis was silica gel (!), which was added to lighten the beer! By 1976, there was a risk that the Food and Drug Administration, would require that all this hoof ointment be listed on the label, which of course one did not want to do. The beer was already starting to lose its reputation, along with its taste. They decided to replace the silica gel with a new preparation, Chill-garde, which is filtered before bottling. But, something went wrong. “Chill-garde not only provided colloidal stability, but also reacted with the foam stabilizer. As a result, 10 million bottles of beer, to the tune of $1.4 million, poured down the sink.

In 1977, they came up with the coolest marketing campaign in the form of a commercial in which a brutal man yelled at the viewer, “Drink Schlitz or I’ll kill you!” Creative, isn’t it! Today’s KFC commercials still have a long way to go. Then they invited James Coburn himself, but it didn’t help the situation.

It seems that they decided to play with the staff and on June 1, 1981, 700 workers went on strike. The result was logical. The company was bought by the Stroh Brewery Company of Detroit, but could not cope with the debts that were hanging over Schlitz. The brewery building was sold to Anheuser-Busch, where they began to produce silica gel supplies to pour Bud Light, and the Schlitz brand was retained by the Stroh Brewery Company. There, the story of the largest brewery in the U.S. ended.

In 1999, Pabst Brewing Company bought Stroh Brewery with all the brands, including Schlitz, and in 2014, as we know, Pabst Brewing was bought by Eugene Kasper, co-owner of the Moscow brewery. And here we come to the very can purchased from Dixie.

There’s no translation on it. The Russian text is printed right on the can. It says that the beer was produced by Privatbrauerei Eichbaum, and that the importer is Moscow Brewing Company. There are no references or references to the States. On the contrary, the theme of German origin of the beer is emphasized, and Helles American Schlitz did not seem to brew. The company website is currently “under construction”, so there is no way to find out the new Schlitz ideology.

My guess. With Pabst, in the Russian market, things are far from a rapid jack. Our soul did not accept the cult beer of American hipsters, did not understand it. It has been decided to launch a more familiar to Russian friends theme with “real German beer”, while the brand Schlitz was lying idle, and it sounds in German. Why not! MPK, unlike beer giants, is not afraid to experiment and introduce new brands “to try”. Until you try it, you never know what will or will not work.

Schlitz Premium Helles (Mannheim, Germany) – 5/11.3 A really smooth German Helles. No worse than the notorious Spaten. Mild, with a nice malt and a bit of bread flavor. A bit floral and honeyed. Hops are light, as this style should be, grassy, meadowy. If you approach it without snobbish and hophead pretensions, it’s very drinkable and enjoyable. The grade is “B-.” If the price stays at 70 rubles, it will be a very popular beer.