When I saw this beer in the store, I turned it around in my hands looking for information on the producer, I thought it was another pseudo-Czech brand. Not a fancy one, like our Žatecký Gus, but exactly a pseudo – supposedly brewed in the Czech Republic, but in fact, anywhere. But the beer with the humble name Czech Royal Beer is, by all appearances, really Czech.

On the royalczechbeer.cz website, it says there are two mini breweries where this beer is brewed, one in Ostrava and one in Břevnov. However, I don’t exclude that this particular beer could have been brewed under contract somewhere else. The address on the label is Praha 1 Štěpánská 615/24, probably just a business address.

Czech Royal Beer Gold (Czech Republic, Ostrava?) – 5/11.99 Malty aroma with slightly noticeable diacetyl. Taste also malted, full. In the aftertaste, in addition to diacetyl, raggy and moderate bitterness, harsh hops. Typical Czech regional, of which we have on the shelves like… a lot of them. One more won’t make a difference. And as usual, the main question – what is it for? Given that the price is more than 100 rubles. I drank it, remembered that in the Czech Republic a lot of mediocre beer and forgot. Rated “C”.

Back to licensed and imported beers. A few posts ago, in the comments, the question arose again about the correspondence between the two types of beer Blue Moon, which, let me remind you, is also brewed in the Czech Republic, under license. What’s sold in the CB chain in the can and what’s sold in bottles in the rest of the stores.

People are confused by the fact that the Russian label of the bottled beer shows an ENS of 14%, while the canned beer from KB shows 12%. And according to fellow bloggers from Yandex-Zen, they taste different, too.

I bought both kinds. In principle, I could have taken them to some brewery, which has a device that determines the ENS, alcohol content and other specifications, but I thought – why? For home brewing, I have a refractometer. It is not very accurate, but you can use it to understand the approximate initial extractivity of the wort. You can also measure the final extractivity in the finished beer, but the error will be larger.

In this case, we do not care about the actual final extractivity, we need to understand – is it different in both samples or not? With a difference of 2%? It should be. Well, it’s not!!! Both are 7% brix. 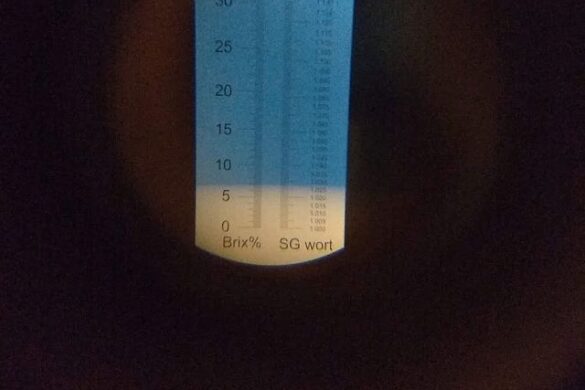 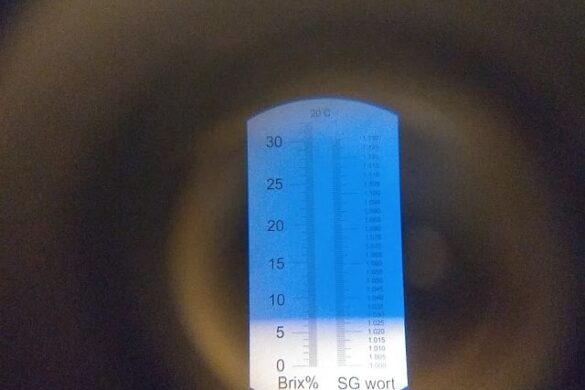 It tastes the same, too. The only difference is the carbonation, which for bottled and canned is quite acceptable.

Bottom line – it is unclear why the Russian slapstick for the KB has 14% ENS on it. As usual, Russian-language slaps are unpredictable. Most likely, it’s just a mistake or a typo. Don’t pay any attention to it.