Continuing the Ashan theme. The Baptist beer was bought there as well, at 180 rubles. Baptist is brewed at Van Steenberge, known to us from beers Gulden Draak, Piraat and many others.

Named “Baptiste,” the beer is named after the brewery’s founder, Jan Baptiste De Bruyne. I don’t know if “Baptiste” was his nickname, name, or just a reference to his creed. Still, if there’s a “Trappist” beer, why wouldn’t there be a “Baptist” one? :) 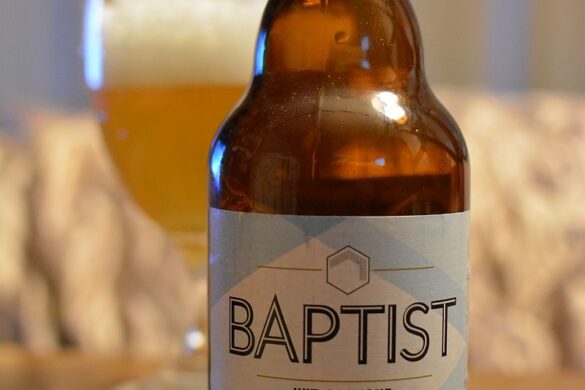 Baptist Blond (Belgium, Ertvelde) – 5/12 Very strange stuff. Malt aroma. Such as in our “southern” lagers. Wet grain and everything. Taste also grain.In the aftertaste honey, dried fruit and a bit of tart hops. What’s that?!

The feeling that the beer is old and oxidized. A defect in the bottle, a batch? I read the reviews – no, lots of people reported it that way. That must be what it’s supposed to be. Why?! It’s not tasty and has nothing to do with the classic blondes. More accurately – it’s a bad blonde. “C-” grade.

Baptist Wit (Belgium, Ertvelde) – 5/12 In the aroma of coriander. The taste is a little floury, but only towards the end of the bottle, when the yeast finally stirred and poured into the glass. In the aftertaste … also coriander and no citrus. Flour, coriander and that’s it. Dull, boring, not interesting. Not as bad as the blond, but still very mediocre. “C” grade.

Surprisingly, neither coriander, nor zest is not listed in the composition shown on the back label (not a word about the Russian-language sticker), although the site specifies everything.

I didn’t expect such a mediocre beer from Van Steenberge. The notion that everything in Belgium is a dud, of course, erroneous (I’m not talking about the giants). On our last trip we had two cases of different beers from mini breweries for tasting with a view to importing them to Russia. Most of it was awful! Some didn’t even try the second case for fear for their health. So here too – alas…