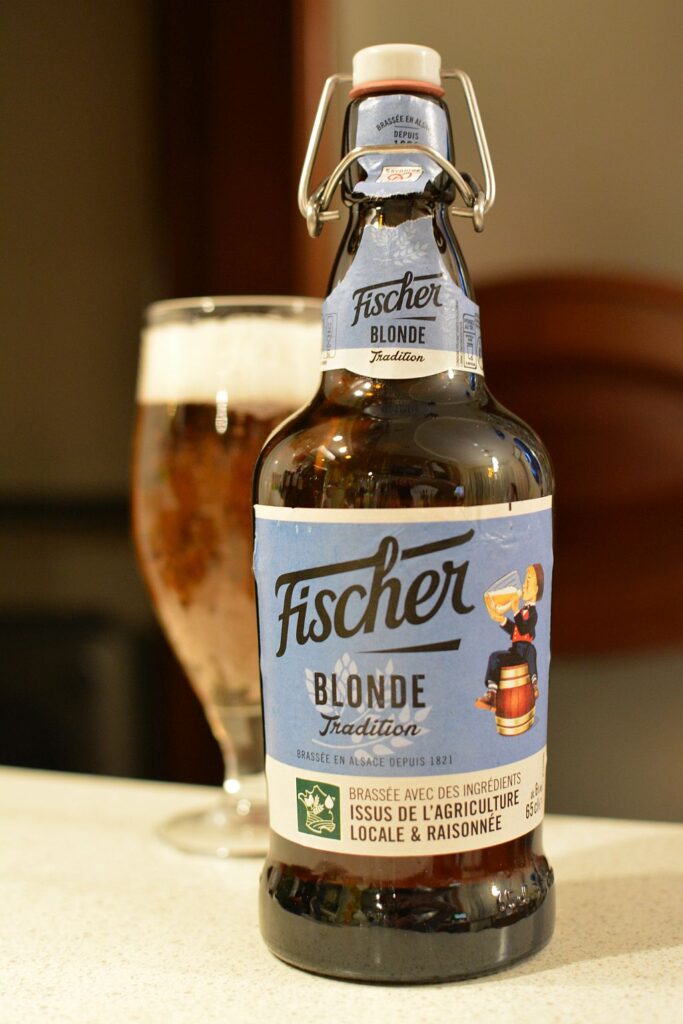 Fischer Tradition is one of the most famous and popular French beers. I fell for the promotion in Metro – something like 360 rubles for a bottle of 0.65. I drank it once a long time ago, but decided to try it again. The brand is owned by Heineken and brewed in Alsace at the Brasserie de Schiltigheim brewery in Schiltigheim.

The brewery opened in 1862, but on the label, we traditionally see the date a little earlier :). After a series of mergers with other breweries, it was acquired by Heineke in 1972. The brewery is not that small, but also not a giant one. Nevertheless, it owns 1/6 of the entire French beer market.

Fischer Tradition (Chiltigheim, France) – 6/13.4 If anyone is misled by the word Blonde, just know that it is simply French for “light”. It has nothing to do with the Belgian style of “blonde”. It’s a regular lager. Well, as usual – 6% of alcohol still attributes it more to the category of festival or on another, Oktoberfest lagers, although on the same “tap” is listed as Pilsner – Other.

There is malt in the aroma. Taste is full-bodied, dry. In the aftertaste you can notice the hops, but it seems to me that for the pils (even if “other”) it is not enough. The hops are harsh, grassy. The manufacturer recommends drinking it at a temperature no higher than 9ºC, which is correct. As soon as the beer gets a little warmer, a little alcoholic hints start to come through. “C” grade.

Apart from the bunghole cork and the pretty bottle, there is nothing interesting about Fischer Tradition. Yes, it’s clean, yes it’s strong, and that’s about it.

And a little announcement for those who haven’t gone to the cottage. On Sunday, the 13th, from 16:00 in the bar “Nettle” we drink a new version of my beer Victor Session Pale Ale. I’ll be glad to see you all at Moscow, Potapovsky lane, 5, building 2.

Sloeber IPA and Rebelse Strop at the Duke Beer Bar