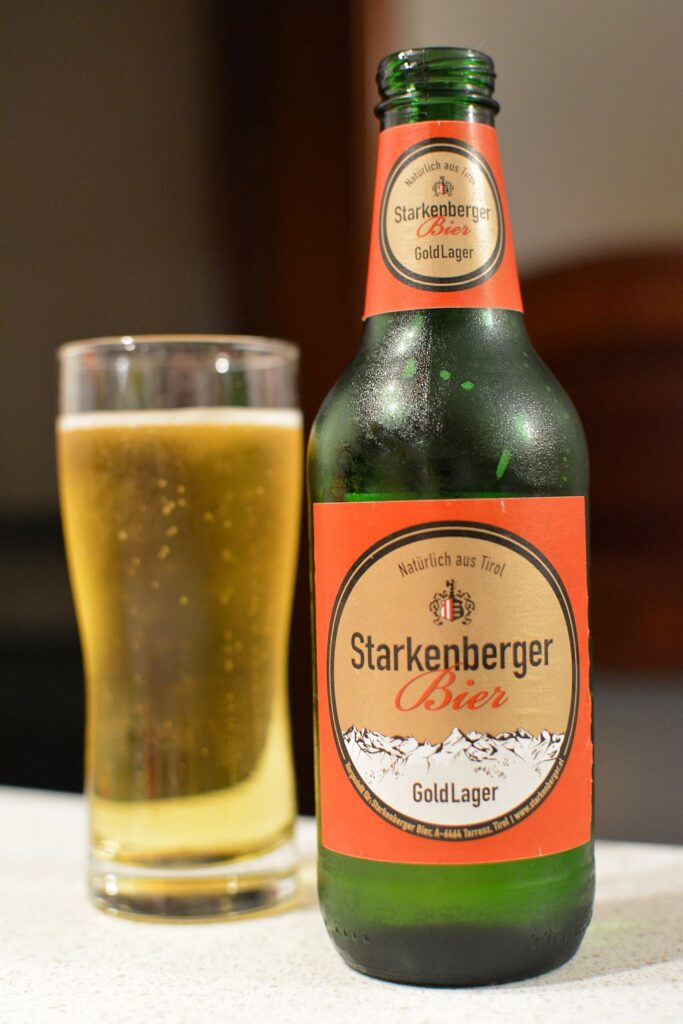 Today let’s talk about the Austrian Starkenberger Gold Lager beer from Schloss Starkenberg Brewery. It’s located in the Tyrolean town of Tarrenz. The word “Schloss” means that the brewery is located in a castle. And it is indeed a very beautiful place with a brewery and an inn.

They modestly say about themselves that they are the only brewery in Austria making “barley juice” without chemical additives. Maybe they really make natural, alive and unfiltered barley juice, but as for the beer (they wrote Gerstensaft for a reason), there are hundreds more Austrian breweries brewing beer “without chemicals. And what does “no chemistry” mean? But, this is a topic for a separate talk, but for now let’s return to the Starkenberger beer.

Starkenberger Gold Lager (Austria, Tarrenz) – 5/11 Aroma, alas, lithe. The taste is empty, malty. The aftertaste has some hops and it’s dry, tart. This beer might be okay in its fresh form – refreshing, bitter, but what I have in my glass is pretty mediocre. C grade.

There was another variety from Starkenberger in the store. It seems to be a bock or festbier. I will try it if possible.

From June 28 we are accepting entries for the third contest in support of home brewing – BEST BREWMASTER AWARD. The organizers of the contest, New Riga’s Brewery and “MirBir”, invite home brewers from all Russia and the near abroad to the competition. To participate in the BEST BREWMASTER AWARD 2021 you should carefully read the rules and fill out a special form.

Applications will be accepted until July 30 and processed until August 5. The organizers will receive the samples by September 20, and the list of finalists will be published on September 27.

The winner of the contest will be announced in early October by New Riga’s Brewery. The brewery team will choose the best homebrewer from among all participants of the competition, based on the submitted beers, according to the suggested criteria, with whom the brewery will subsequently brew a collaborative variety.

5. All types of fruit varieties.

*The addition of berries or fruit automatically places the beer in category 5. Adding spices, coffee does not change the category.

Each category will have one finalist (6 total). Up to two varieties (maximum) in bottles of 1 liter each are accepted from one competitor.

The finalists will receive gifts from New Riga’s and MirBeer.