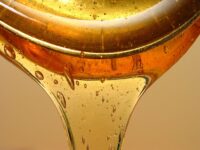 Maltose syrup is one of the bugaboos that beer opponents use to scare people. They say, “Citizens, the goddamn brewers are pouring some disgusting stuff into beer! This is instead of everyone’s favorite, native malt. The topic of maltose syrup has come up on beer websites more than once. So what is this, evil or the normal march of progress? I’ll try to figure it out.

First of all, what is “maltrose syrup”? It’s not hard to find out, thank goodness we know how to google.

Maltose syrup is produced by saccharifying starch-containing raw materials (corn and barley malt) with enzymes and then filtering the syrups and boiling them down to a certain density.
Maltose syrup is brown in color and has a sweet taste with a malt flavor and a slight malt smell.

In fact, there is nothing criminal here. The product is quite natural. The main question is why is it added to beer?

You can not add (in the past we did not add, were only satisfied with the malt). But what if the malt is of poor quality, the extractivity is low? In other words, the sugar that the yeast converts into alcohol in it is small. After all, beer, unlike wine, should always taste the same. You can’t tell the consumer – “This year’s barley crop is not important, so the beer is so…”. This is where unshrubbery and molasses come to the rescue.

This can be seen very well in the example of Belarusian beer. In Belarus, the wise Lukashenko banned the import of malt. Use only Belarusian malt! So we have to use either corn, or rice, or molasses to maintain a constant taste and quality of beer. And that’s how they write it on the label, either…or…

So, on the one hand, maltose syrup seems to only help brewers. But there is still some reticence, which makes the phrase “maltose syrup” feel unpleasant.

And here’s another trend I’ve noticed: maltose syrup is usually part of cheap beer. Beer for the Poor. Of course, you can argue with this and find a dozen brands of very decent beer with the proverbial molasses, but still there is a pattern. Bad molasses beer is plentiful, but good beer is scarce.

So why do some breweries use this ingredient (AB InBev and EFES are particularly fond of molasses) and others do not?

It’s probably easier to ask the brewers themselves. I asked.

First and foremost, of course, is “calling a friend.” To our Israeli friend Rafael Agaev, a great specialist in brewing.

Raf said right away that Carlsberg Israel does not use molasses. Why?! Their brewing tradition is such that it’s fine without it. Tra-di-ti-on!

Here’s what Raphael says about molasses:

What happens during molasses fermentation? The sugar is fermented into alcohol. But beer is not just made up of alcohol. It also has to have flavor in it. But it is the unfermentable sugars, of which there are many more in the malt wort, that give it its flavor. The idea is that you can make beer from molasses alone. I don’t know, has anyone done similar experiments? It is theoretically possible. Again, purely theoretically, we will get an almost transparent liquid with a small final density and a lot of alcohol.

By the way, the notorious Cold Shot 6.5with a total tastelessness and great strength, is not it made this way! Maltose syrup is in the composition of this drink.

So, thesis one – molasses is needed mainly for “getting alcohol”.

In the production of “beer for the poor,” where taste is not important, this is a valuable property.

It is also believed that molasses makes beer cheaper. But Yuri Katunin, for example, argues that this is not the case. That the cost of molasses is not much lower than malt. I have no reason not to trust Yura. But! If you just, in a straightforward way, compare the cost of maltose syrup and malt, that may be the case. But don’t forget that there is also the filtration process, where some volume of beer is lost. I think that when molasses is used, the amount of loss is reduced. Because molasses replaces some of the malt and pellets and there is less waste. And as already mentioned, you can use cheaper, lower quality malt. Isn’t that an economy? The savings are certainly a penny, but in the volume of beer giants, a penny turns into a full ruble!

The second thesis – maltose syrup, however, reduces the cost of production, not due to its cheapness, but by reducing waste and using less high-quality malt.

And most importantly, does molasses affect the taste of the beer? Since molasses is not used in Israel (although Raphael said that according to his observations, beer with molasses has a more empty taste), he turned to domestic producers. I asked Ruslan Vladimirov at Vyatch. True, Vyatich doesn’t use molasses either, but they should keep up with “brewing innovations” and be aware of them.

Ruslan said that they experimented with molasses molasses and, based on their tasting results, decided not to use it after all. The taste of beer using maltose molasses was clearly worse than “real beer. Why and how it was expressed, Ruslan could not answer, but the taste was different, that’s for sure.

Why this is so, I too find it difficult to answer. This is a question for biochemists and other scientists. Perhaps maltose molasses doesn’t have that many different substances that malt has and the fermentation doesn’t produce the whole bouquet of sugars, higher alcohols and esters that are responsible for aroma and flavor.

In order to give an accurate answer to such questions, you need to relatively taste the same beer brewed with and without molasses. Which, you will agree, is practically impossible, because, no one is going to brew two versions of beer.

The third thesis is that maltose syrup still affects the taste and usually not for the better.

So is molasses really evil? No. As with everything in this world, you can’t measure it only by good/bad. Maltose syrup makes it possible to maintain consistency in flavor, which is very important in mass production. It allows you to increase the strength without increasing the density, which in some cases is probably also necessary.

But all useful things can be turned into harm. Molasses to achieve “degree”, and “finish” the taste with some flavoring. The temptation is great! And reduce the cost of beer and move a competitor in the so popular segment of mass-produced “beer for the poor”? What manufacturer wouldn’t you want?

So when you take a bottle of beer off the shelf and see the dreaded maltose molasses in it, don’t be in a hurry to put the bottle down. Try a beer. What if you like it? And you’ll say, “Hmmm, in spite of the molasses, it’s a pretty decent beer…”

What kind of beer is better – bottled...