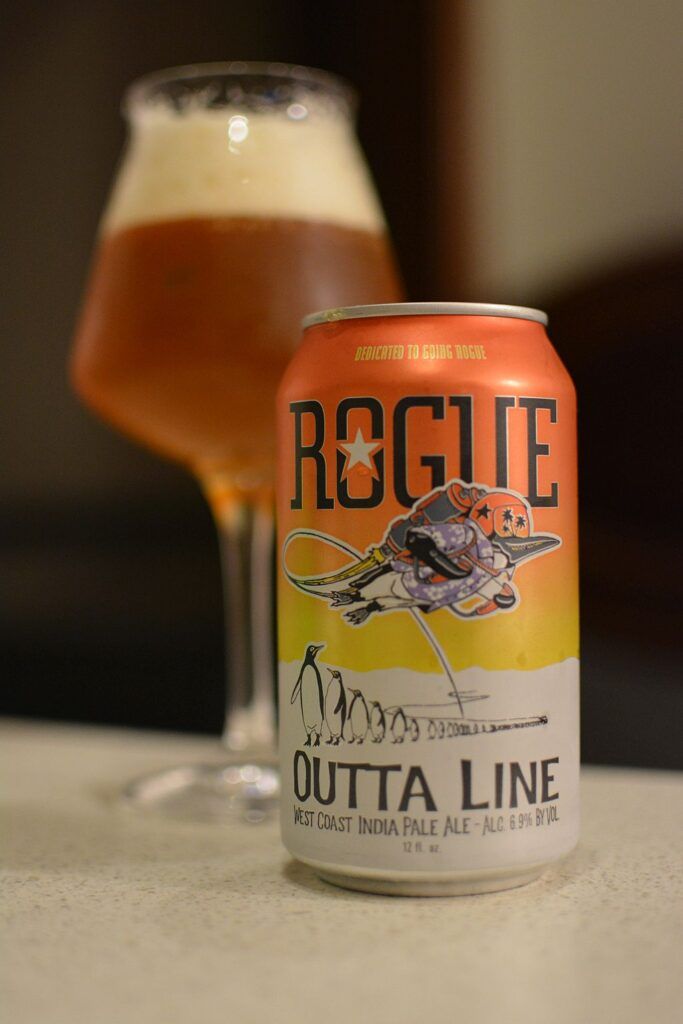 It’s been a while since I’ve seen a beer from Rogue on sale. Maybe MPC stopped carrying it, or maybe I just haven’t come across it. But all of a sudden I saw a few cans I hadn’t tried before. Took only Outta Line IPA though. The sell-by date is not over yet, but still not fresh. Although, I think if it’s not expired, you can drink and appreciate the beer, although you can make some correction “to the wind”.

Recently on Zen, I got into not so much an argument, but some sort of discussion. The author argued that our brewers “still need to learn how to brew like in the States.” I don’t quite understand the meaning of that expression – to learn how to brew. Learn how? To read books, and therefore – oh, hops to fall asleep… So… oh, there’s more yeast?! … What’s up?! Especially since there are also professional brewers in Russian kraft who teach themselves (i.e., teach at institutes).

The question is why American hop varieties are the bomb while ours are… well, let’s just say, not all and often not up to American? I see two reasons. The first is the freshness of the hops. Americans have access to absolutely fresh, just picked and processed. With us, “fresh” is considered last year’s, because most of the new crop only reaches Russia in the spring. Americans can “cork” the very best aroma and flavor in a can or bottle.

The second is bottling lines. Very good lines we have few places, and controlling oxygen, so can “not everyone. I’m not saying that absolutely all breweries in the States are super-duper equipped, but it seems to me that compared to ours (hospital average), better.

Now let’s move on to beer.

Rogue Outta Line IPA (Newport, USA) – 6.9% alk. Despite the timing, flavor is bright, herringbone and citrus. There is, however, a bit of dried fruit, it’s written off on the aging. There are not a lot of them, so I will not pick on you. The taste is full, a little bit caramel (someone tried to convince me that IPA must not have caramel!). In the aftertaste, resinous herringbone and citrus.

A great, powerful, bright and well-drinking IPA. Rated B+.