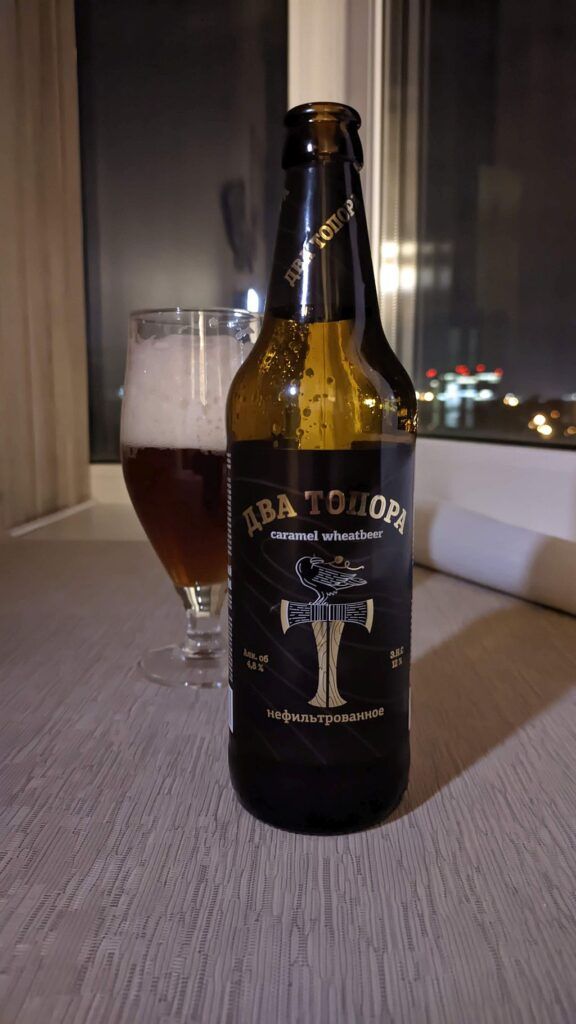 I think everyone has heard about the port “Three Axes”, and now here is “Two Axes” (Dva Topora) beer. Brewed at Kozhevnikovo brewery and bought at Perekrestok. What’s interesting, according to the comments of the brewery’s official Untappd account, this beer is discontinued. And indeed – the bottling is in May. This is to the question of the wonders of logistics at X5, or rather Perekriostok itself. Where and why was this beer lying around, on its way or lying around (underline this) so that it reaches the shelves after almost six months?

On the subject of working with networks. If anyone thinks that putting their beer on the shelf in the same Perekryostok will solve the problem of sales and be happy to count the money. No, more likely to get a lot of new problems and sometimes even consumer dissatisfaction.

Getting ahead of myself, I’ll say that the beer survived the “pickling” in the warehouse just fine. And what will it pasteurized with a period of 12 months.

Dva topora (Two Axes) (Russia, Tomsk region, Kozhevnikovo village) – 4.8/12 In terms of style it is a Dunkelweizen, but it is impossible to guess this from the label, and indeed from the official description on the website.

Dark unfiltered beer brewed according to the original recipe based on wheat and caramel malt. Strong beer of dense copper hue with a soft velvet flavor.

Why the 4.8% alcohol content is considered “strong beer” in Kozhevnikovo is a mystery! There’s a bit of banana in the flavor, which transitions into a lacquer coloring. However, this is the only drawback of Two Axes (by the way, why such a name?!). This is also the only advantage.

The taste is flat and empty. Traces of caramel. There is a bit of bitterness, but it’s obviously superfluous here and doesn’t change anything. On the one hand, a pretty clean beer (apart from not quite the right flavor), on the other hand – empty. How anyone could brew a Weizen like this, much less a Dunkelweizen, is a mystery. C- rating.